Learn how to build a random forest from scratch with python.

Random forests are known as ensemble learning methods used for classification and regression, but in this particular case I'll be focusing on classification. Random forests are essentially a collection of decision trees that are each fit on a subsample of the data. While an individual tree is typically noisey and subject to high variance, random forests average many different trees, which in turn reduces the variability and leave us with a powerful classifier.

Random forests are also non-parametric and require little to no parameter tuning. They differ from many common machine learning models used today that are typically optimized using gradient descent. Models like linear regression, support vector machines, neural networks, etc. require a lot of matrix based operations, while tree based models like random forest are constructed with basic arithmetic. In other words, to build a tree all we're really doing is selecting a hand full of observations from out dataset, picking a few features to look through, and finding the value that makes the best split in our data. We'll define what what it means to be the "best split" in a bit..

A quick overview if you're not familiar with binary decision trees. We start from very top, which we'll call the root node, and ask a simple question. If the answer to the question is correct we'll move to the left node directly connected below, which we'll call the left child, otherwise, if the answer is wrong we'll move down to the right node, which we'll call the right child. We'll repeat this process until we reach one of the bottom nodes, also known as the terminal nodes. For classification the terminal nodes output the class that is the mode while in the context of regression they'll output the mean prediction. 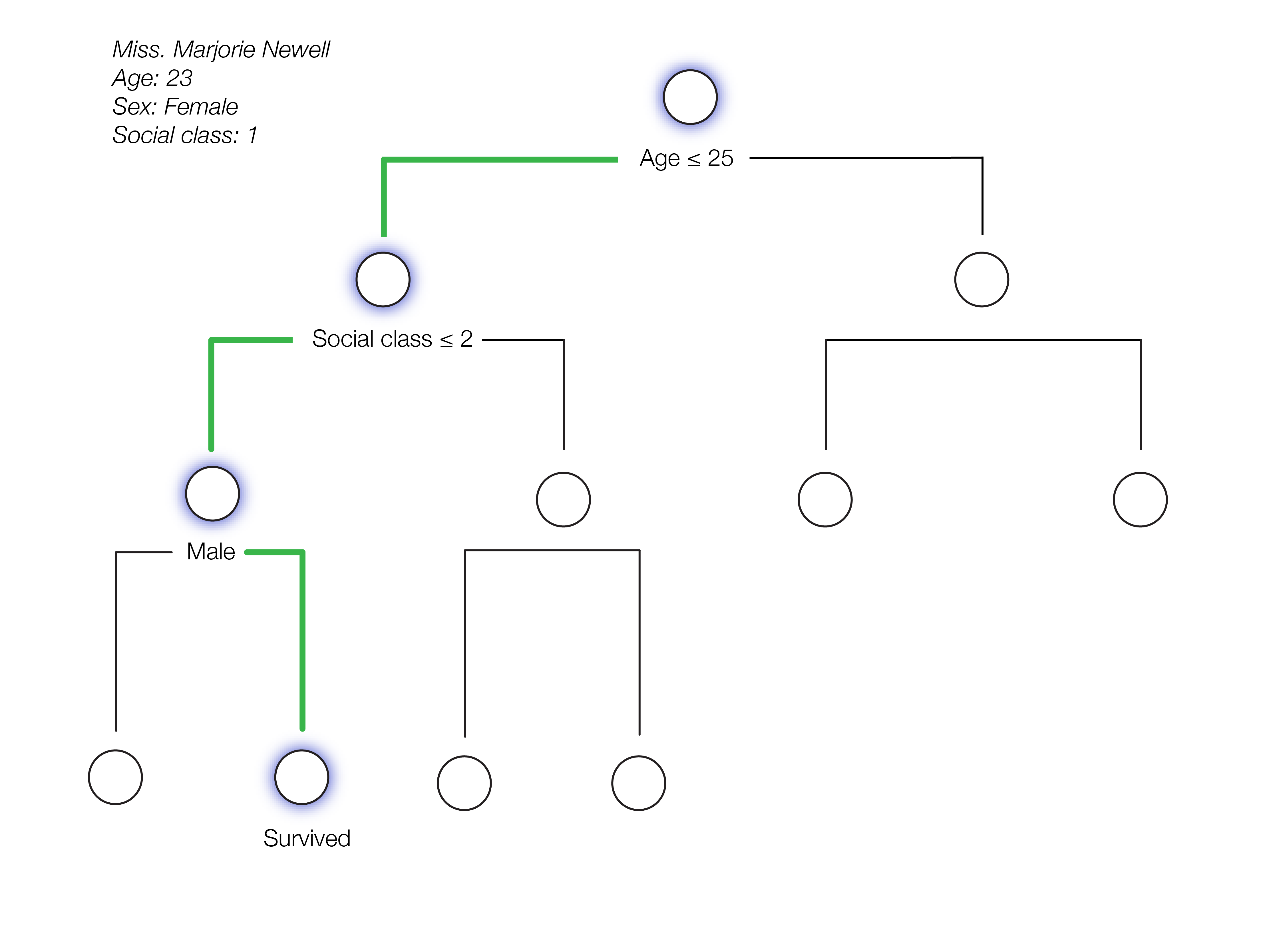 The problem with relying on a single tree is that it needs a lot of depth to gain strong predictive power. Binary decision trees can have up to size $2^{d+1}-1$, where $d$ is the depth of the tree, so for example, a tree with a depth of 10 can ask up to 2047 different questions. This ultimately leads to a lot of complexity within our tree and in the world of machine learning high complexity leads to high variance. The image below illustrates the problem with an individual decision tree having high variance.

Decision trees have whats called low bias and high variance. This just means that our model is inconsistent, but accurate on average. Imagine a dart board filled with darts all over the place missing left and right, however, if we were to average them into just 1 dart we could have a bullseye. Each individual tree can be thought of as the innacurate darts and a random forest would give us that bullseye.

In this particular example I'll be using Kaggles Titanic dataset. This dataset is incredibly simple and will be useful for demonstrating how the model works in its entirety.

Something important to note is that random forests don't handle missing values. This will require some preprocessing steps before training a model if there's any missing data. For simplicity I will just be replacing any missing values with the features avarage or mode. I'm not going to dwell on the details of this dataset, so if you're interested in learning more about it I would highly recommend looking over kernels within the competition.

The most commonly used measurements for constructing binary decision trees are: Entropy, Classification Error, and Gini index. In this thread we'll be focusing on entropy, which a measurement of uncertainty (sometimes called impurity) that uses the following formula $$H(X) = -\sum_{j}p_j\log p_j$$ such that $p_j$ is the probability of class $j$.
At first glance this formula might not make any sense, but once we see some examples it actually has some great properties. In the case of binary classification entropy takes on the form $$H(X) = -p\log_2p-(1-p)\log_2(1-p)$$ where $p$ denotes $P(X=1)$ (the probablity that a passenger survived). Also note that in the case of binary classification we use $\log_2$, agian we'll see more about this in a bit

Entropy follows a very intuitive interpretation with the following properties:

One of the main reasons random forests are so powerul is due to the randomness injected into each tree. What do I mean by this? Each individual decision tree will be constructed on a bootstrapped subset of our data. If our dataset has $n$ observations bootstrapping is the process of sampling $n$ points with replacement. This means that some obsverations in our data set will be selected more than once and some won't be selected at all. We can actually calculate that the probability an observation is omitted from our bootstrapped dataset is $(1 - \frac{1}{n})^{n}$. By definition $e^{-1} = \displaystyle \lim_{n\to\infty}(1-\frac{1}{n})^n$ and since $e^{-1}$ = 0.36787.. $\approx \frac{1}{3}$ $\Rightarrow$ bootstrapping $n$ samples with replacement will leave out approximately $\frac{1}{3}$ of the observations in each distinct tree. Since each individual tree is built using only $\frac{2}{3}$ of the data we'll find that most trees will differ significantly from one another. If interested, a full proof of this can be found on my blog here.

The other great thing that comes with bootstrapping is that we get whats called an out-of-bag error estimate for free. The OOB (out-of-bag) samples are the $\approx \frac{1}{3}$ observations that were not selected to build a parcticular tree. Once we've built our tree with the n bootstrapped observations we can test each $\vec{x}_i$ that was left out and compute the mean prediction error from those samples. We can compute an OOB score for each tree and take the average of all those scores to get an estimate for how accurate our random forests performs, this is essentially leave-one-out cross validation. This will give us an estimate for how accurate our model is without having to formally test it on new data and we'll soon find that it is approximately the same error rate we'll get at test time.

The other great idea that random forests introduce is the concept of bagging. Bagging is the process of growing a tree where each node in the tree looks at every value in our bootstrapped sample in every feature to find the best split in the data at that particular node. This is repeated for all trees.

Random forests follow the same procedure as bagging, however, the key difference is that on a dataset with $p$ features each tree will only look at a subset of $m$ features where $m=\sqrt(p)$. This is injecting even more randomness into the model due to the fact that if we sampled all $p$ features in each tree we would likely be making splits at the same values from the same features in most trees. Given that we are only looking at $\sqrt(p)$ features at one time many of the trees will look at a different groups of feature from one another. With this we'll be able to produce many *uncorrelated* trees which will help us capture a lot of the variability as well as interactions between multiple variables.

Show Me The Code

Now that we understand how to construct an individual decision tree and all the necessary steps to build our random forest lets write it all from scratch in python.

where entropy takes in a probability of a class within a node and information_gain takes in a list of the classes from the left and right child and returns the information gain of that particular split.

Lets also define a draw_bootstrap function that can take in the training input $X$ in the form of a dataframe and also the output $y$ in the form of an array. We'll have it return the bootstrap sampled $X_{boot}$ and $y_{boot}$ that we'll use to construct a tree. We'll also return the out-of-bag observations that were left out for training which we'll call X_oob andy_oob. At each new iteration we'll use the OOB samples to evaluate the performance of the tree built with the bootstrapped data. So in other words, if we have 100 trees we'll have 100 OOB scores

Next we'll define find_split_point which does the following:

We'll next need a function that decides when to stop splitting nodes in a tree and finally output a terminal node (classifies whether the passenger survives or perishes). On a single tree split_node works as follows:

There are others parameters to consider when building a random forest, but these 4 will be the only ones we'll focus on in this thread

To build a single tree we'll need the $X_{boot}$ and $y_{boot}$ values from our bootstrapped data along with the max_depth, min_samples_split, and max_features parameters. We first call find_split_point to create the very first split in our tree which we'll call *root_node*. Once we have a root node we can feed it into split_node which will recusively split each internal node until each branch has a terminal node. Now that we can build a single tree we can finally build our random forest which will just be a collection of these trees. When we call random_forest we'll need to specify n_estimators, max_features, max_depth, min_samples_split. Then for each tree we've built we'll use all the observations left out of our bootstrapped data to get our OOB score and append it on to a list (I'll talk about how to compute the OOB score and predict on a single tree below). Once we've built n_estimators trees we can print the mean OOB score and return the full list of trees which will represent our ensemble.

Given a input vector $\vec{x}_i$ we can predict its class given a single tree with predict_tree. As a single tree consists of nested dictionaries which each represent a node we can let our $\vec{x}_i$ flow through a tree by constantly checking if the split we're at contains another dictionary (node). Once we reach a left_split or right_split that does not contain any dictionary we've reached the terminal node and we can return the class.

We'll repeat the above process for an input $\vec{x}_i$ for all the trees in our ensemble and whichever class was returned more frequently will be the class predicted from our model.

I hope this was of use for anyone curious to learn about random forests. Random forests are great for an array reasons that include an easy implementation and require little to no parameter tuning. RF's may not be power houses like neural networks or gradient boosting models, but they should certainly be in everyones machine learning repertoire. There are methods that can allow you to see which variables are more important than others that I didn't cover in this thread, but are worth looking into. Hopefully this can also help you get in the right direction if you are also interested in understanding how gradient boosting models like Xgboost work.